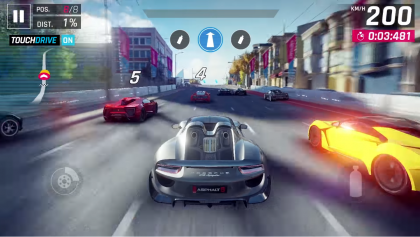 Car games and racing are a hit on every platform – and on mobile phones the story is no different.

Here are the two best games of the year for you, with detailed reviews. Check it out:

If you are a fan of racing games, you need to have Asphalt 9 installed. But if you don’t like this racing style, Gameloft game makes you rethink its concept.

There are over 50 supercars, 60 seasons, 70 very detailed tracks, over 800 different events (and counting) and up to 8 players in real time multiplayer mode. Not only did the ultra-realistic graphics (in HDR1) make me ecstatic, but the gameplay is equally amazing.

The graphics are surreal on many runways from great places like Cairo, the Himalayas, Rome, San Francisco, Scotland and Shanghai.

Asphalt showcases the beauty of incredible cars. From Bugatti, Ferrari, Porsche, Lamborghini, W Motors, and more – most of which you get with diagrams, completing daily missions, and evolving your “Career” garage. The cars are already incredible of course, but for those who like full customization, you can put stickers, change the colors of the rims and brake calipers.

In addition, Asphalt 9 has a soundtrack that is to be congratulated. There are 36 songs that mix alternative and dance style music, electronic and rock. All this to create fully emerged show experience for your game, bringing animation at the right time and tranquility at the end of the game.

And finally, one of the differences from the current version to the previous one, Asphalt 8, is called TouchDrive. According to Gameloft, it’s “a new steering system that frees you from the wheel so you can enjoy all the arcade action in the game”. In other words, it’s much easier to play.

After Nintendo released titles for the mobile market such as Super Mario Run, Animal Crossing: Pocket Camp and Miitomo, it showed a change of course by producing videogames for platforms other than Nintendo.

With the reissue of Mario Kart 8 for Nintendo Switch being one of the most purchased video games for the latest Japanese console, Nintendo made the famous Kart races of characters like Mario, Luigi, Peach or Bowser available for the first time on mobile, a wider audience that reached top downloads at 90 million from the starting week only.

The game has brought simple and interesting controls to its well-known version. Those who want to play with just one hand can play very well. But it also allows for more sophisticated use and, if you want to be the best, it even requires you to have a little more spirit and start using both (one for riding and one for throwing items). You can still throw turtle shells with the precision of a top basketball player in the NBA odds.

Basically, all Mario Kart concepts are in the game. What disappears and can be a little frustrating is the acceleration. Constant speed doesn’t get in the way of the game, and it does take away some of the essential feel in racing games.

Besides, Mario Kart Tour did not surprise most critics. It features many of the go-karts, characters and racetracks seen in Mario Kart 8, but reduces the mechanics and controls to suit touch screen devices. To play, just swipe left or right of the screen to steer and float. You can also swipe up and down to throw items at other drivers and disrupt them. You can still touch the screen to propel the kart, but if you don’t, the throttle is automatically pressed.

Overall, it’s worth giving the game a try. It’s really not the same as grabbing your console and guiding the beloved franchise characters through the tracks we love to take. After all, it is a mobile game. And it’s a good mobile game.