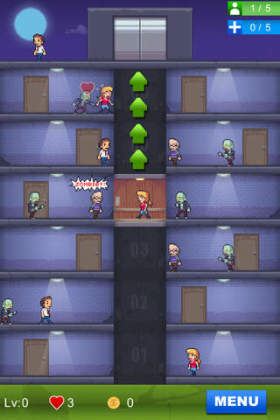 It’s that time again! We love a good game here at mobiletweaks.net and, like everyone, if they’re free they’re even better! So in true fashion of our site, we’ve gathered the best games we can find this week that normally have that paid pricetag but are currently free. But as always, you have to act fast! Zombie Building is about as straightforward as you get. Zombies have infested your building and you, as self-styled hero, are determined to save them! Get the people of your building to the rooftop via your trusty elevator where safety waits. Drag your elevator from floor to floor to collect the people of the building, being careful to dodge the zombies chasing them, and keeping from overloading the elevator. Do that and zombies will the last of your problems! A timed play and a life-based play are your options for play modes and there are leaderboards, like any good game, to show off your life-saving, zombie-dodging skills. Normally, iOS games are featured in this lineup, but Witches’ Brew happens to be the favorite game my youngest son has at the moment on his tablet. The premise is simple. Collect your ingredients by tilting your device to catch them as they fall (and avoiding the bad ingredients) to put them in your cauldron and brew your potions. It’s cute, fun, and easy to pick up. And who doesn’t love a good Halloween game? It can also be found on iOS here! I’m a huge fan of word games. Boggle, Scrabble, you name it. Being just that, Lucky Words was one that I jumped at the moment I heard that it was free. You start with a 5 X 5 play area, with a letter per square. From there, you add one letter per turn, until all of the squares are filled up. Make the most words, or the hardest words, and you get more points. A good assortment of modes, ranging from Turbo, single, online multiplayer or local multiplayer (done old-school by passing the device back and forth) and even a “Guess a Word” game mode, will keep you coming back over and over to play this addicting little game. Marketing itself as a fun little physics game, Bunny escape follows a somewhat familiar formula. Considered a one-swipe game, you use the abilities of 5 different bunnies to move through the complicated levels to help the growing assortment of bunnies break out of the prisons that their enemy, the Owl, has kept them in. Start with a basic bunny and expand, as the game progresses, into a cast of others that showcase different abilities. It is somewhat reminiscent of the classic Angry Birds, though it isn’t a clone at all. Pick through 50 levels of fun, though you can expect more as updates come from the developers. You can pick this one up on iPad and iPod Touch as well.