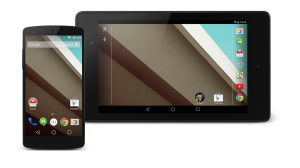 Without fail, Google has announced the development of the next version of Android to be offered on it’s upcoming devices. Tentatively called Android L, Google is looking to shake up the design of it’s operating system in an unexpected way. With an overhaul to the outward appearance of the system, a new runtime setup, and customization to your notifications, Google is looking to create a powerful version of Android to combat some of the rumors surrounding the upcoming iOS8. Material Design, the new interface style Google is promoting with Android L, is designed to make the experience with your Android phone smoother and more natural in both visual style and interaction with the rest of your devices. Smoother animations is something Android is looking to adhere to across the entire operating system. It’s responsive interactions, a system in place to have your input with your phone be directly responsive to how and where you touch the screen, will be subtle at first but really create a silky method of movement in comparison with earlier versions of Android. Screen transitions are markedly smoother and maintain a continuity throughout any application used by creating a consistent slide from each screen to the next within an given app. By getting rid of a shocking difference in how each screen is populated, it provides fluid movement within Android L.

While the Android runtime ART has been available since 4.4 it was always an optional feature. However, in Android L, ART is the default runtime. While primarily a potential issue for developers, standard users could see a hiccup in how some of their favorite apps behave if developers do not approach their updates quickly enough. With more popular apps, this has not been a large issue in the past as Google often releases work models of their new APKs to major developers for updating. ART will allow developers to take advantage of the new Material Design interface by creating their apps within the style and maintain a UI transition element that users will find familiar.

Notifications are being tweaked and redesigned, but primarily on a presentation level. With the ability to expand messages and view images after their taken without fully opening the corresponding application, Android L brings a level of quick access to it’s new operating system that hasn’t been present before. Custom images from specific people can be placed into the notification itself and even apps that usually completely immerse the phone in a manner that disallows notifications to come through can be circumvented by setting high priority contacts. These contacts will always have their notifications pushed through, no matter how deep your app closes off your phone. With more and more about Android L being released and experienced as it moves through it’s beta phase, we are only just beginning to learn what Google has in store for us. As always, Android “L” will not be the final release name. It seems that Google is maintaining tradition and keeping the new name quiet until just before release.