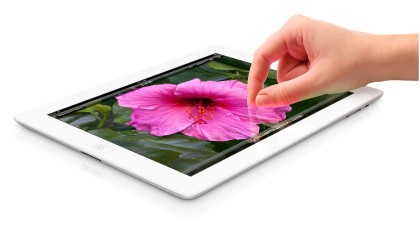 It seems that the next iPad, set to release this month, will have a few changes from the previous incarnations of Apple’s popular tablet. First and foremost, Apple is expected to follow the design of the incredibly popular iPad Air, the thinner and lighter version of the now classic table released in 2013 to much fanfare. However, they plan on following the trend that many tablet manufacturers such as Samsung and Sony have been starting in both the smartphone market and the tablet market. Rather than stay with the current 9.7 inch design, Apple is set to up the ante by making the new iteration come in at 12.9 inches, which will make it one of the largest tablets on the market and carry an extra 75% more screen real estate.

It’s expected for Apple to release an attachable keyboard to accompany the massive tablet, which is actually a full two inches larger than the MacBook Air, but this has not been confirmed.

Many wonder at what point the mobile market will become cumbersome in size as it seems that our devices continue to get bigger and bigger. Screen size isn’t the only thing that Apple is offering this go round with the iPad. It’s expected to carry the Touch ID fingerprint sensor made popular by the iPhone 5S and standard by the iPhone 6 and 6 Plus. Along with the Touch ID, it’s expected to feature Apple Pay functionality, though I question the ease of using an iPad to pay for a purchase at a cash register over possibly just tapping the much smaller iPhone to the NFC receiver.

In addition, it seems that Apple will also introduce a multi-window function similar to the one used in Windows since Windows 7 was released for PCs. The split screen function is one that many have been waiting for Apple to catch up to, something that PCs and Windows tablets have had for quite some time. The larger iPad will be accompanied by a newer version of the 9.7 inch iPad Air, which will also carry many of the newer features that can be expected on the 12.9 inch version. Upgraded internals will come as well, putting the computing power of each tablet a bit above what you can expect from the iPhone 6 and 6 Plus, though that in of itself is to be expected in a device that is considered the bridge between a desktop system and your mobile.

In terms of storage, nothing is confirmed, though most expect the new iPads to carry the same sweeping range of storage options that the iPhone 6 offers in 16, 64, and 128GB options, though considering the overall heavy use of many tablets and how most users work with them, those options may be larger or at least have a larger base size.

Expect the announcement of the new iPad Air and its 12.9 inch bigger brother this month from Apple, though keep in mind that Apple is notoriously close-lipped about much of its information regarding new devices. Nearly anything is subject to change, though with the announcement close, it’s a safe bet that the rumors you’re hearing regarding the tablet are true.

Newer PostThe Best and Most Unique Third Party Keyboards for iOS 8!
Older PostControllers for All: The Easiest Way to Use Your Sony Controller on your iPhone