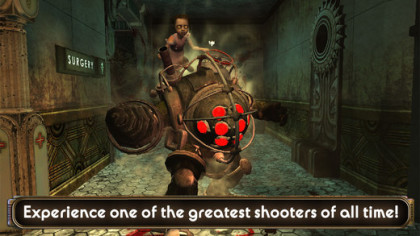 Bioshock is easily one of the classic and best first-person shooter games developed in the last decade. Originally published by 2K games in 2007, the game has seen numerous ports to different systems and that willingness to adapt to whatever system or OS that was required has allowed the game to spawn a series of incredibly successful followers. Now Bioshock has found it’s way, for the first time, onto your mobile device. Released for the App Store Wednesday evening, 2K is hoping to to recreate some of the hype the original Bioshock brought along with it’s momentous debut in 2007.

Bioshock for iOS is a complete port of the original offering that could be found on multiple previous generation systems, though those very familiar with the game will see that the graphics have been pulled back to accommodate running smoothly on the iPhone and iPad. It will offer controller mapping support, which is connected via Bluetooth to your device, to offer a more console-centric experience to those that pick the game up. However, for those that wish to stay with the mobile experience, or simply don’t have the room or the patience to carry around a controller for a single mobile game, the game features touch screen controls and an auto-aim feature to allow it to be played on the go easier. The only downside to Bioshock on iOS is the price point at which it was released. Coming in at $14.99, it is much pricier than other games on the App Store of a similar quality. In fact, it clocks in at one of the more expensive games released as an app, especially one that most steady gamers have played at least once considering Bioshock is nearly eight years old. With the scaled-back graphics and the propensity for more single-serving, quick-play games on mobile devices, I personally question the shelf life of Bioshock for iOS.

However, 2K has always shown the ability to respond to demand of ports of their popular games and this is no different. It’s not to be said that Bioshock is not a quality game and don’t let the sound of scaled down graphics scare you into to not trying a fantastic game if you haven’t. The idea that some have not played this classic simply because of a lack of the proper system to do so is not a foreign one and it seems 2K is responding to that demand, or the potential demand, of a market that may not have realized it had wonderful gaming capabilities in their pockets all along. Capabilities that stretched so much beyond Flappy Bird or the countless Bejeweled clones available. So if you’re willing to hand Apple your fifteen dollars, you’d be hard pressed to find something better than Bioshock. The story still stands strong and the game play is magnificent, even for a touch device. It’s yet to be seen if it’s follow-ups will make it, though we may be further down the road from a technology standpoint before mobile devices can handle games such as Bioshock Infinite.