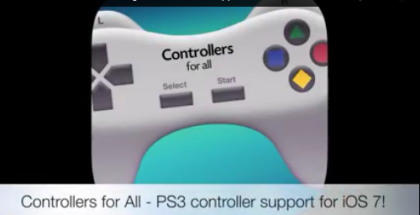 The most hardcore gamers find touch controls that mobile gaming requires to be cumbersome and tiring. Often your fingers get in the way of what’s happening on the screen and sometimes the input just doesn’t work the way you need it to. What’s the point of having nearly 6 inches of screen if you can’t use it all to see some of the amazing visuals that these mobile games actually do offer?

Gamers have been calling for native support of third-party controllers for some time now, especially on Apple devices such as the iPhone, or at least one that’s been jailbroken.

Enter Controllers for All. Controllers for All is an absolute steal at $1.99 due to its incredible ease in setting up. Of course, your iPhone needs to be jailbroken in order for this to work. But once this process is completed and Controllers for All installed, any iPhone game that supports MFI, which stands for Made for iPhone, in iOS or later will be playable on the Sony DualShock 3 or, now with the latest update, Dualshock 4 from the PS4.

After installing Controllers for All, simply work through the application and pair your PS3 or PS4 controller to your iPhone via SixPair, a PC/Mac program that allows functionality of the Sony controllers to be spread to your iOS device. SixPair is as easy to use as Controllers for All and all the instructions you will need are included in the download and the respective websites.

This basically allows you to use your iPhone, a powerful gaming device in its own right, as a full-fledged gaming console. Just check to see if the game you wish you play has MFi controller support included in the download, though most new games that are being released come with the support. If you are unsure, check comments and forums related to the release.

I tested Grand Theft Auto: San Andreas and I have to honestly say that it works better than any other controller application I’ve used for any mobile device I’ve owned. There was little to no input lag and the native support and button configurations worked like a charm. Even the pressure triggers on the controller responded the way they were designed to, something that many controller apps for mobile devices have had quite a bit of trouble with in the past. The application for your device is straightforward and low-impact. You’re not going to find a host of confusing settings that require an engineering degree to decipher. In fact, one of the selling points of the application is its ease of use, something the developers hinge their product on.

And keep in mind, as stated before this is basically a console creator. By pairing your iPhone with Controllers for All and using AirPlay with your AppleTV, you will be able to play any MFi enabled game on your television with your PlayStation controller. And with the fidelity of both Controllers for All and AppleTV, you’ll be surprised at how convincing your iPhone or iPad can be at pretending to be your PlayStation or Xbox.