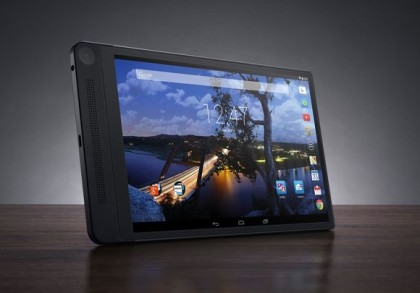 The tablet market is, quite frankly, oversaturated. Everyone, and it really does seem like everyone, makes and distributes their own tablet and it seems that each has an amazing new and unique feature that’s, honestly, found just about everyone else. From tablets that are dirt cheap (and work about as well as dirt) to tablets with built in keyboards that they still seem to call a tablet instead of just a laptop, it’s near impossible to really see what’s good and what isn’t.

However, during the furor over the release of the latest iPhone and watch, Dell snuck one in on us. This mouthful of a tablet may just possibly be the best Android tablet on the market in terms of size, power, and application.

For one, this tablet is only 6.0mm thick, making it the thinnest tablet in the world by a whopping (yes, whopping) .4mm, beating out Sony and its Xperia Z2 tablet. The screen comes in at somewhat of a midpoint of 8.4 inches with an absolutely amazing 2560×1600 OLED panel that brings some of the most vivid colors you’ll see out of a tablet. And since the glass runs completely to the corners of the device, there’s very little real estate lost to casing. An impressive set of internals backs up this amazingly thin piece of technology. Running Android 4.4 KitKat and will, without a doubt, be able to run the likely soon to be released Android L platform on its quad-core 2.33 GHz Atom z3580 processor. Add in 32GB of internal storage and likely, keeping with the standard for Android devices, an expandable memory slot, the Dell Venue 8 7840 will definitely redefine what it is to be a tablet in a world where phones, tablets, and laptops are slowly merging into something new.

The Dell houses its front-facing speakers in a grip that also holds two of the four cameras the tablet boasts. These four cameras are part of a revolutionary concept Dell is pushing. Called Intel RealSense, the cameras push the boundaries of 3D technology to not only include the ability to take 3D pictures, but allows you to use any picture you take to gain a true sense of depth and not just a visual representation of it. The rear-facing cameras can, with a single shot, actually tell you distances and depth of field in the resulting photo. With this sense of distance in your photo, you can gain control and manipulation of the image that you have never been able to have before from cameras in tablets and smartphones. With a single photo, you can control each aperture on the device, giving the illusion of multiple pictures taken from different angles and allowing for some truly incredible photographs taking from the 8MP camera.

While no exact date has been released, it is believed that Dell will release this monster of a tablet by the holiday season in the United States and elsewhere.

Newer PostThe Free App Roundup! These Apps will usually cost you, but not right now!
Older PostThe New iPhone 6 and the iPhone 6 Plus: What There is to Know