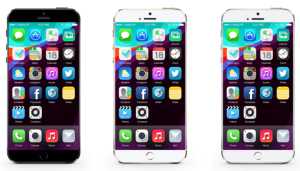 With the public release of the iPhone 6 looming right around the corner, there has been a lot of speculation on the device itself. How big will it be, how fast, how powerful, battery life; these are all questions that are most commonly asked when considering the latest Apple release. However, as with most changes to the generation of the iPhone, there often comes a new version of the well-loved iOS. Currently in it’s 7th iteration, iOS is markedly easy to use and intuitive. But the OS is, in terms of technology, aging, and Apple realizes this. So, if rumor hold true, we will see the release of the newest version of iOS, iOS 8, either with or around the release of the iPhone 6. Codenamed Okemo and announced by Apple at the Worldwide Developers Conference this year on June 2nd, iOS 8 looks to implement a new programming language in for the development of applications, make the best use possible of the powerful internal hardware of the latest iPhone, and still provide a seamless experience to their current customer base that will be switching from one OS to the new one.

One of the clearest features of iOS 8 will be the interactive notifications. Currently, the pop up notification for a text or email allows you to tap and open the corresponding application. However, in iOS 8, with a simple swipe downward you can respond in-line to the notification you had just received, even from the lock screen without having to unlock your phone. Along with the newest support to predictive text, iOS 8 will now allow for third party keyboard integration, such as the ever-popular Swype, to be used in the OS.

Apple has taken a direct interest in how iMessage works between users. Now with the ability to send and share audio and video directly through iMessage, almost in the manner of FaceTime, Apple is looking to almost seamlessly integrate the concepts of calls and messages. Each item, either audio or video, can be shared for a certain amount of time or indefinitely. In addition, group messaging now exists in iMessage, allowing the naming of a group and basic functions. Possibly the most innovative feature seen thus far is the ability to share purchases from iTunes, iBooks, and the App Store without sharing accounts with up to six different people. This allows the purchaser of the shared content to approve the sharing of the content with anyone else, granting or denying permission at will. Features such as Find my iPhone are included.

A small gathering of other new tweaks and features, such as TouchID for third party applications and an always listening version of Siri, much in the vein of Android’s Google Now, and the folding in of the Shazam music identifying app with Siri itself, will help to round out what is already promising to be an exciting and useful update to the ever-popular iOS platform.

Though iOS 8 has no scheduled release date, it is expected to release with the iPhone 6 in early September.