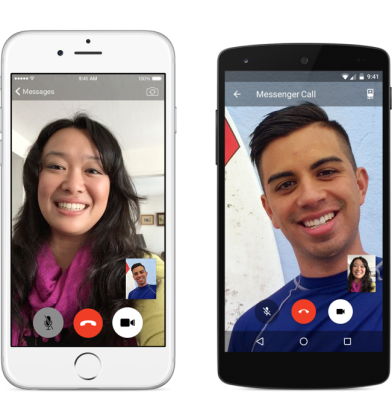 Facebook Messenger has introduced a new service for iOS and Android users, named VOIP video calling over cellular and WiFi connections. On initial basis the services will be available for UK, Canada, US and 15 other countries’ Facebook users.

Facebook’s aims to connect their users face to face without the restriction of area they are living in, and the mobile network they are using. While using Facebook messenger the iOS and Android users can do video chat with someone having another operating system, even if they are using other network without paying a single penny.

Check out a quick video review from Facebook that shows Messenger video calls in action:

This latest Facebook feature allows you to start a video call from any conversation with a single tap. While messaging if you think the words are not enough to express your love simply tap on the video button available on the top right corner of your chat box and get started a face to face conversation with your loved. This feature simply converts your text conversation into a video chat. Video calling in Messenger features will be available from today for both Android and iOS users in United States, United Kingdom, France, Denmark, Belgium, Canada, Uruguay, Portugal, Greece, Laos, Ireland, Mexico, Poland and Oman. This is not the end Facebook is going to add more region in upcoming months.

If you are a regular user of Facebook, you would know about their voice chat service. But the newly released video calling feature improves the real time communication, while enabling the 600 million Facebook Messenger users in different regions. You don’t need to worry about the call quality it will be adjusted as per your connection speed. The voice and video calling is extremely high quality depends on the connection you are using, in case your connection goes down/weaken Facebook will notify you if the video call will not work.

The service is all free from Facebook you just need to pay the charges of your mobile network connection like 3G or LTE, but a WiFi connection is a best option to avoid that charges as well.

If you remember, last month Facebook revealed their money sending service, and the launch of Business on Messenger is coming soon. The recent updates show Facebook is serious to treat their mobile users as they are increasing rapidly.