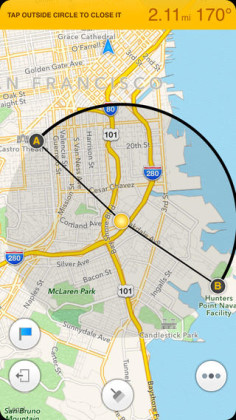 Once again, a new week is here! And despite the uproar of the latest release from Cupertino and its fruit company, it’s time for a roundup of apps that, for a short time, are free! So settle in, be quick and timely, and see what you can grab before they go back to costing you a few bucks! We’re expanding our selection this week to include any and all apps and not just games, so look here first for the coolest and most useful apps you can find for iOS! You’ll find just about everything in this app. A GPS tracker, speedometer, rangefinder, Theodolite (which is used to measure angles in horizontal and vertical planes.) If you need it and it has to do with distance and movement, then it’s going to be covered here! You can save your tracks and waypoints in a list, which you can simply tap to gain a bit more information on the listing like distance covered and average speed and time taken for that track. It’s a handy app for runners and hikers alike. The tycoon-style game, where you take a business or a theme park, traditionally, has grown in popularity over the years. Everyone loves a sim game and this little gem is just that. Create a business with an idea from a list of tech products, market it, promote it, make some money, and eventually sell-out for the biggest bucks you can get. Then gloat to your friends. But are you learning something about the spirit of the startup, even if it’s somewhat dramatized? That’s up to you to decide. Stress Baal is about as simple as you can get. Stressed out and angry? Rather than punching the closest person, use this app to flip and flick the little red demon into submission. With a seemingless endless ways to mess with him, Stress Baal is good for a few laughs when you really, really need them. Zombies want to eat you. You do not want to be eaten by zombies. You live on a multitude of small round planets and hordes of zombies are coming at you from both sides? What do you do? You fight your way through, of course! Survive way after wave of undead onslaught in this cute shoot-em-up! Yes, the Camera App in iOS can take panoramic shots. However, they can be tricky and often still leave you short of the wide shot that you were hoping for. DMD has released their app, for free, that not only makes the panoramic shot easy, but even allows you to take one in a full 360 degree angle. The primary app is powerful and free, but it does offer some in-app purchases that they say will enhance your experience with DMD. However, for simply what it is, it is a fun and useful app that outstrips what Apple has to offer in many ways.

Newer PostThe Goophone i6 may be for you if all you want is the look of the newest Apple device
Older PostThe Dell Venue 8: The World’s Thinnest Tablet and maybe the Best to be Released this Year.