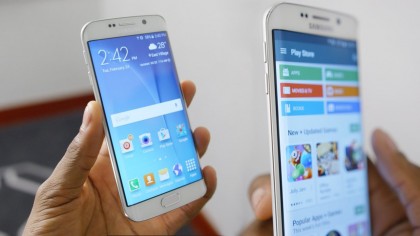 Rumor has it that the new Galaxy S6 Edge Plus is on its way. This phone is the Ferrari to the Samsung Galaxy S6’s BMW. Well, ok perhaps the differences are not as extreme as described, but you get the drift. The phone is spectacular and features some great high-quality functions.
Galaxy S6 Edge Plus features two rounded sides which create an innovative and bold design that probably has the best screen on a smartphone on today’s market. If you wish to own this “baby” you will have to set aside between $100 and $130.
It is nothing new for Samsung to release multiple variants of its Galaxy smartphones. However, this is the very first time that Samsung has announced and released two sibling models at the same time. At first the new S6 Edge Plus seems slimmer, but it actually isn’t.

Design
This phone features 5.1-inch metal-wrought display and is adorned with a rounded glass on the left and right side. Due to the curved screen the phone features symmetrical ridges and gives a flattened bubble effect. The physical apparel of the phone is really something. It feels slim but balanced at the same time, and its sharper sides provide users a solid firm grip.
When compared to its predecessor S6, Edge gives a more modern and chic look. The curved display isn’t just for showoffs. When navigating around the Edge, you will be amazed at the icons and images as opposite to viewing them on the flat display.

Camera
Android cameras have gone a long way and now are a lot better than they were a few years ago when they lagged behind iPhone. This particular handset features a 16 MP camera with F1.9 aperture and OIS. The front facing camera has a 5 MP shooter and you can capture some awesome photos. To launch the camera just double press the home button. It is quite easy to switch controls and modes on the camera itself.

Software
Galaxy S6 Edge is powered by Android Lollipop 5.0.2 operating system. There are numerous preinstalled Samsung apps within the device such as Milk Music, Peel Smart Remote, OneDrive, Skype, SHealth, Memo and more. Samsung did a great job on allowing users to customize the quick settings panel. The user interactions necessary for customizing the device have been improved a lot as well.
Conclusion
This is one sleek phone with fantastic features. It looks good, it feels good and it does everything the box says. The camera is one of its best functions. The battery life is about as good as some other phones within its class such as Moto X, iPhone 6, but still not as great as the Sony Xperia Z3 or iPhone 6 Plus. The overall conclusion is that if you are looking for a good, durable and eye-catching smartphone then this one falls right within that class. It is sleek, modern and chick. Packed with many useful features and functions.