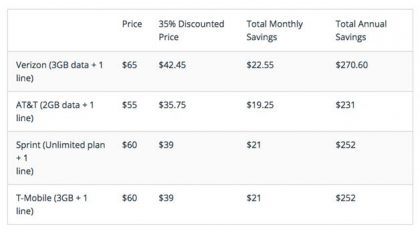 We’ve all seen the cell carrier package deals that come out over and over again. They offer bundling, and all sorts of data plans that are meant to attract customers. Various versions of text, calling and data usage plans can sometimes seem like a good deal, and may be depending on your usage. But if you’re like most people, you almost never think about your cell phone plan.

The four major wireless carriers are currently engaged in a price war. T-Mobile and Sprint are dramatically pushing down prices, and the two biggest carriers, AT&T and Verizon, are being forced to follow. That makes 2018 a fantastic time to renegotiate your wireless bill.

If you’re looking for ways to save money, this is a great place to start. While you could switch your plan to one of the lower-cost competitors’ plans, you can also save money by  renegotiating your bill, getting discounts on your current service.

“You’ll need a lot of preparation and patience.” says Julien Bouyssou, co-founder and CEO of BillXperts.com. Doing it involves studying your current bill, talking multiple times to the carrier, and knowing exactly what to ask for when talking to the carrier about a lower bill.

How much can you save? According to a study done among bill cutting services, the average saving of successfully negotiated cell carrier bills can be between 25 – 35 percent. Here’s what that looks like across different carriers:

When you call your carrier, you’ll want to make sure you have looked over your bill to see if there are any easy ways you can get the negotiation started with. You may find your being charged for unnecessary items on the bill or that your usage doesn’t justify your package. Simple downgrades save money too.

Comparing competitor rates and packages and asking your carrier to match them has also seen some success. Asking for a specific discount gives a good starting point to the negotiation, and asking for too much can set you up for denial all together. Experts also encourage customers to use a written script, be polite, ask for a supervisor and be persistent when negotiating.

Getting more from your carrier for the same amount of money

If your signal isn’t good, you can negotiate some nice extras from your carrier as well.

“If you have a poor signal, you can tell your carrier that you need to get a signal booster. They will typically cost between $300 and $1,000.” says Sina Khanifar, CEO of repeaterstore.com.

“Use this as a negotiating point to get better signal. Your carrier might give you a free device. Verizon calls them “Network Extenders”, AT&T calls them “Microcells” and T-Mobile calls them ‘personal cellspots.’ These rely on using your broadband connection to generate cell signal inside your house.”

Remember, getting good cell signal inside your house is your carrier’s responsibility. If you don’t get great signal, push them on your need for signal booster and ask for a discount.