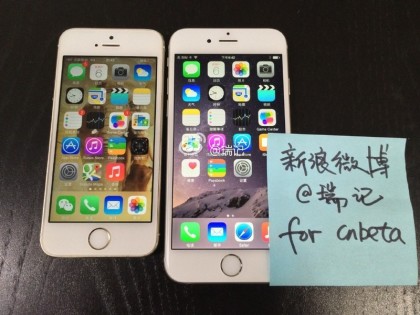 Apple has always remained as tight lipped about their upcoming releases as possible in the past. Without a doubt, they have some of the tightest security concerning their new devices that you will find, though it seems that with every release something often more than just a rumor escapes into the public before the major reveal. From accidentally leaving the phone at nearby bars to pictures and first hand accounts, its hard in this day and age to keep a secret.

The new iPhone 6, slated for release in three days time, seems to be no exception to the rule if the newly released video is to be believed.

A Chinese poster by the name of “zzray” has released images along with a short video that shows the upcoming 4.7 inch iPhone 6 that seems to confirm several of the rumors that have been circulating amongst the community that’s been clamoring for any sort of confirmation to their hopes about the upcoming device.

The 4.7 inch screen has been no secret. Along with the second 5.5 inch iPhone 6, images of the Sapphire glass screen were released weeks ago, but actually seeing the picture of the 4.7 inch offering sparks hope that other rumors, such as the supposed NFC payment feature, are true. And the new Passbook icon, now accompanied with the image of a small credit card, seems to be the proof that the Near Field Communication system accompanied in the new iPhone 6 will allow users to pay with just a swipe of their phone.

The brief video displays little, only showing the size difference with a small number of new features, but confirmation that the new iPhone will be keeping the Touch ID interface that the iPhone 5S included. In addition, the video reveals that due to the larger standard size of the new display it is able to support a sixth row of iOS icons along the bottom.

The iPhone is sleek and smooth along the edges, having seemingly dropped the sharp corners and edges along the sides of the phone itself in favor of a smooth transition from front to back. The display, as best as the grainy video can show, seems to bright and clear and the OS is just as snappy and quick as ever, thanks to the upgraded internals.

It is not surprising that we are seeing the iPhone 6 early, even if just by a few days. Manufactured in China, it comes as no surprise that the version of the iPhone released is the Chinese version. There has been no response from Apple just yet about the leak, though in all likelihood there will be none. The launch is set to happen on September 9th, along with the reveal of the iWatch and likely the new iOS 8. Apple will likely ignore the leak and pretend it never happened, and that is the best approach. By the 9th and the event itself, the leak will be forgotten and the line will be around the block for people to experience the iPhone 6 themselves.

All as usual and, in ways, expected.

Check out the leaked video here.

Newer PostThe New iPhone 6 and the iPhone 6 Plus: What There is to Know
Older PostOkay Google! New Functions in Google Now and New Fun!