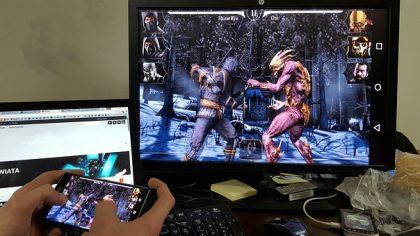 We all know how tedious and boring commuting can be. However, it does not have to always be this way. With the right knowledge and planning, you can easily kill the boredom associated with public transport. With the mobile gaming revolution that has seen a rise in the use of mobile games as a source of entertainment; you can have the most exciting commuting experience. This is especially so if you know the right kind of games to play.

Whether you enjoy playing casino games or you looking to challenge your mind with a complicated collection of mobile games, we have compiled an interesting list of exciting mobile games that you can play to kill boredom. Our list contains mobile games that are compatible with both Android and iOS devices.

Here is a list of some of the best entertainment mobile games that you can play during your lunch break or while on public transport.

Fallout Shelter is based on a routine of building a vault as well as managing it. The player is tasked with creating a perfect society with its citizens in it. The player is also required to keep the society of this vault’s citizens happy. Players can do this by providing them with necessary resources such as water, food, and power. Balancing these three supplies is a crucial aspect of Fallout Shelter. The game is available for Android and iOS mobile phones.

If you are interested in a first-person shooter action game, with an incorporation of some rocket-propelled grenades (RPGs), then Shadowgun Legends is the game to buy. The game is about Shadowguns (a team of elite mercenaries) who are in a war against an attacking alien race known as Torment. This game comprises of multiple missions which are assigned by individuals operating the Hub, you are required to follow the instructions given by the Hub to complete the mission. The Hub is a composition of shops, casinos, or a game bar in the game. Once you are through with every mission, you are awarded experience points that enable you to progress to more challenging missions. This is one of the best sci-fi games available on iOS and Android gadgets.

If you are interested in a farming simulation game, Stardew Valley is one of those types of games available on Android and iOS mobile phones. The plot of the game is about an individual who leaves city life to work on a dilapidated land in Stardew Valley. The player is tasked to manage a character in running an ordinary social life as they undertake farming as well. The farming activities executed in the game include livestock keeping, tilling the land, planting, and tending the crops. There are also mines to explore and treasures to loot in efforts to expand their farm. However, the player should be vigilant of monsters living within caves and mines around Stardew Valley. The game allows players to play in their pace as well as explore activities that they find fit.

This is not the first third-person shooter game you will come across. However, if you love police games where enemies are brought to justice, then Space Marshals will make your commuting fun. Space Marshalls is a sci-fi game that tasks the player to avoid attacks from galaxy fugitives in their efforts to capture them. The game has different missions that the player pursues one after the other after completing every given level. The game has been released for both iOS and Android phones.

Racing games have been in the gaming scene for a long time, and this retro racer game comes with lots of fun. The player is required to complete finish races situated across the world. The game has a sequel of incredible levels in forty cities. To complete every race, the player is tasked to collect fuel pickups as well as tokens that give you a way to more tracks. Horizon Chase is known for nitro boosts that allow players to increase their racing speed. You can also get a new car or upgrade an old one. The race begins with a pack of opponents ahead of you whom you are required to pass for a win. Horizon Chase is available for Android and iOS mobile gadgets.

Angry Birds is now set as a sequel, with the second edition having been released in 2015 in both Android and iOS mobile devices. The plot of the first and second edition is the same, where the player launches birds using a slingshot to attack pigs on the playing field. The difference with Angry Bird 2 is that the player gets the privilege to select desired birds from a deck, which is not the case with the first edition. Angry Birds 2 also has an additional bird called Silver. It also incorporates spells in the place of power-ups. If you are a fan of Angry Birds, then it is time to have a more advanced experience of the game in your iOS or Android mobile phone.

For fans of puzzle games, The Eyes of Ara is the ideal choice. Not only does the game allow you to solve puzzles, but it also provides you with a privilege to explore a picturesque world as well as unlock doors to numerous treasure rooms. The play takes place in a stylised medieval castle. If you are familiar with games such as The Room and Myst, you could be getting to a breed of these two games by buying The Eyes of Ara. The game was initially designed for PCs, but it is now featured on mobile gadgets, which gives you a more convenient way to enjoy playing on the go.

The Pro Evolution Soccer sequel has attracted masses of fans due to their unique and advanced football simulations. The game has been developed for playing on PCs and PlayStation for quite some time. However, recent editions such as the Pro Evolution Soccer 2019 have been availed on mobile phones. The 2019 version of the game comes with additional features such as more licenses to stadiums and leagues, more legendary players, and an enhanced negotiation system. The game also has eleven additional skill traits, rising and dipping shots, an edge turn, and a control loop. Pro Evolution Soccer 2019 is free, just like the other editions. However, you can pay money for extra players and other in-app purchases.

This is for all casino lovers. You can enjoy all your favourite card game variants on your mobile phone as you commute. Blackjack is a comparing card game where players compete against a dealer and not against each other. The goal of the game is to win against the dealer in the various ways outlined by the rules of the game. Online casinos have innovated Blackjack video games, allowing you to place a bet as you play the game. You can play different blackjack variants by downloading the Blackjack game from any of the listed online casinos at black-jack.com. The game can be played on any Android, Windows, or iOS gadget.

The RBI Baseball games are well designed to give baseball lovers the best baseball simulation. The 2019 edition has updated features compared to the other versions of the RBI Baseball sequel. Such features include improved simulation elements and roasters. Players can also play across all the parks in Major League Baseball. The game has easy controls and improved soundtracks that give you an incredible experience as you play the game. The 2019 edition also allows players to select over 165 baseball players.