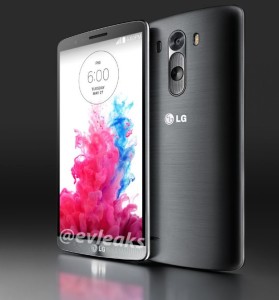 While not a newcomer to the smartphone market, LG has gained a lot of popularity with the release of the G2 and it’s innovative design. However, coming up next month, the Korean company has announced the release of 2 different variants of it’s new offering, the G3. Slated for release in September, the G3 Beat and Stylus is set to compete directly with the new iPhone 6 from Apple, and from the looks of the specs it is well prepared to take on the technology giant.

The standard LG G3, which has been available for nearly a month and and is known as the G3 Prime, is by all means, a large phone. At 5.5” and carrying a resolution of 1440×2560, the phone is a close competitor for the size of what many are calling the “phablet” or a near hybrid of smartphone and smaller range tablet in terms of size. Coming standard with Android 4.4.2, known as KitKat, the phone promises to continue the ease-of-use found in all Android devices today. The Qualcomm Snapdragon 801 Quad-Core processor, clocking in at 2.5GHz, is arguably one of the most powerful chipsets on the market for mobile technology and the 3GB of RAM and 32GB of on-board storage promise some of the most inspiring performance you can find in the smartphone market.

The LG G3 S, or Beat as it will be known in some markets, is a smaller version of the standard smartphone. Nearly an inch smaller, coming in at 5.0”, the display is a step down in terms of resolution as well. At 720×1280, it’s display is still incredibly sharp and detailed, though not as much as it’s bigger brother. The Snapdragon 400 Quad-Core processor clocks at 1.2 GHz and the phone itself carries a RAM capacity of 1GB, the industry average at the moment. It can still brag the KitKat version of Android and like the other versions, comes in a variety of colors. While still a “Mini” version of the G3, it still packs a punch in terms of power and portability.

The Stylus, however, is the big brother to both versions of the G3, though in size only. Marketed to be competition to the Galaxy Note series of phones, the Stylus has a 5.7” screen, though it’s resolution is the same as the Beat. In fact, much of the internals are nearly the same as Beat, though it lacks the same Snapdragon chipset that the other two carry inside. It seems the G3 Stylus’ primary function is to be a cheaper consideration to the upcoming Galaxy Note 4 phablet, especially when the most obvious aspect of the larger G3 is the the stylus that comes with the device itself, a direct response to the Samsung S Pen.

LG continues to bring powerful mobile devices to the public with the G series new additions next month, especially in terms of power against the Android powerhouse Galaxy series. By offering a number of choices of their popular line, LG seems to be capitalizing on the customization factor that often makes Android phones so popular.

The G3 “Beat” and the G3 “Stylus” are slated for release in September.