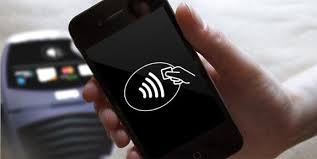 NFC, or Near Field Communication, has been a steadily growing feature in Android phones for several years now. With it’s roots in RFID technology, NFC works in a similar manner of transferring, and allowing access to, an exchange of information between a device and the NFC tag itself. Android phones have been incorporating NFC technology since Android 4.0 was released in a feature called Android Beam. The short range technology is useful for a host of short-range exchanges between devices, such as contact information, bookmarks, links, and other data. This technology has also been implemented in the use of payment systems via your Android device through the storage of card information and loyalty programs through encrypted means. With a simple tap or or wave of your phone near the NFC payment receiver, your payment is taken and processed. No need for anything else to be associated with the transaction. Up through the current iPhone, the 5S, NFC has been a non-existent piece of tech for Apple devices. However, rumors surrounding the pending release of the iPhone 6 suggest that Apple is getting on board with the convenience of NFC payment technology. Sources claim that the next iPhone will feature it’s own payment platform in the increasingly familiar feature and will consider the NFC payment system one of the hallmark feature of the iPhone 6. It’s believed that, due to another leaked detailed logic board from a reader of MacRumors, that the new iPhone will feature NXP’s PN65 NFC chip in the soon to be released phone. As it stands there is no promise of the NFC payment system, but the aforementioned chip and the rumors circulating the iPhone over the last several years point to it being a prominent process in the next iPhone’s mobile payment platform. Looking to possibly use the bevy of credit card information stored in it’s millions upon millions of iTunes accounts as a basis for a mobile payment process, there would be little beyond authorizations required from current iPhone users to get a NFC payment platform up and going. The fact is that the information is already present in Apple’s servers. This would simply allow Apple to bypass third-party payment processors by dealing direct with credit card companies and not through an intermediary. Don’t look for a difference in your bill on your credit card if this comes true. It simply lends itself to the idea that safety in your personal financial information will become even more stable and apparent in that Apple will be dealing direct with Visa or MasterCard instead of the host of go-betweens that could easily allow your information out if guidelines weren’t adhered to directly. With the release of the iPhone 6 right around the corner and rumors about the device flying, the only guarantee we can count on concerning this new piece of technology for your iDevice is to simply wait and see. But rumors start from somewhere and given the clout of these claims, it’s a safe bet to see NFC used heavily in the upcoming phone.