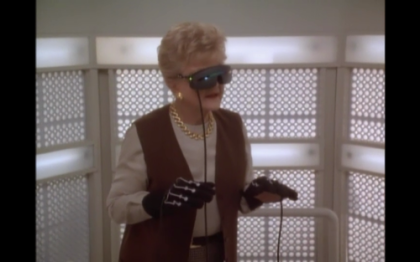 For the last several years, the trend of 3D has been growing. While once a novelty thing in movie theaters, it seems that the technology took a turn for the serious when most every major movie seemed to have a 3D version available for viewing on its release. Home televisions even began popping up with the technology and it seemed that it was going to be the future of movies and television.

Then full immersive technology, once again something that was considered a fad years ago due to poor progression, has come roaring to the forefront. The obvious culprit is the Oculus Rift headset. While the Oculus Rift is aimed at video game immersion, there are a growing number of alternatives that mix that immersion with more than just video games. Altered Reality, something that has been gaining popularity thanks to what’s now an older technology like the Kinect or the Playstation Eye camera, has become one of the major hallmarks of the immersion movement that many see as not only as the future of gaming, but the future of computing in general.

Oculus Rift, recently purchased by Facebook for reasons that many are unsure of still (Immersive Farmville sounds more enraging than intriguing) is arguably what brought this technology back to the forefront. The major misconception concerning the Oculus Rift is centered around its availability and just what all is entailed by the tech itself. The headset itself, The Rift, is actually not a commercially available product just yet. The proposed date for the commercial version of the Rift is set for 2015, though through donations and the website, the developer’s kit is available to buy. A lot has been said about the Rift over the years, so this article won’t focus on that headset itself. Oculus, however, does power a few other headsets on the market, namely our next entry. The Samsung Gear VR seems to be the direction that we will likely see most full immersion headsets go in the future. The Gear VR does not have its own CPU/GPU, or even its own screen for that matter. Its computational tech and all its visuals are provided by the, surprise surprise, the new Samsung Galaxy Note 4. In what is obviously a marketing ploy, and a genius one at that given the Galaxy Note’s almost fanatical (at times) crowd, Samsung and Oculus have paired to bring us what is truthfully quite the impressive VR headset.

As stated, it is completely powered by the Galaxy Note 4. By inserting your Note 4 into the front of of the Gear VR, it creates a completely untethered version of a VR headset by using the Note’s internals and battery power. And given the already impressive power of the Galaxy Note 4, the Gear VR carries a lot of potential for being something quite powerful itself. While the Gear VR is not commercially available, much in the same vein as the Rift, Samsung and Oculus are being very open about its development and are consistently showing it, with impressive results, at various trade shows and conventions. The Gear, as stated before, is powered by Oculus. Basically this means that the team at Oculus has been responsible for the development of the Gear VR since its inception. It was a bit of a daunting task as the Android OS and the Note 4’s GPU needed a full reoptimization of its drivers to allow it to function with virtual reality in a truly in-depth manner and not in a way that would leave consumers disappointed. The housing that holds the Note 4 carries motion sensors and an external camera that syncs with the sensors in the smartphone itself to provide a highly sensitive and detailed range of motion while the external camera actually allows the Gear VR to provide an Augmented Reality experience if desired, with things like a HUD to provide a host of information about the world around you, much like the Google Glass. Google Glass deserves a mention, even though it isn’t a VR headset. The AR aspects of Glass are exactly how any virtual reality headset is going to survive for any decent length of time. With its real-time display showing most everything your smartphone can, at least when it comes to things such as messages and other indicators, Glass is an extremely early indicator of where the wearable market, like VR headsets and even Smartwatches, are headed. However, the bulkiness of a VR headset and the awkward look of Glass are two large hurdles to overcome. The VR market is starting to expand and several other companies, such as Carl Zeiss, Durovis, and Poppy, are releasing what they are marketing as low-cost VR headsets. The Zeiss offering is interesting in that it is compatible with any smartphone between the 4.7 inches and 5.5 inches, though it takes only a quick search to realize that there is pretty much no software or support for the VR One. The market is a young one, so there is hope for some sort of standard yet, though that’s yet to be seen if it will be embraced as such. But what if you want a VR headset but aren’t looking to spend what most of the companies are asking, which even at $100 for the Carl Veiss VR One is still steep for something with little support? Google has your answer. Called Google Cardboard, the free app on the Play Store gives you a design for building your own headset for your phone out of, you got it, cardboard. While there’s not a lot of software for it, Google uses much of what it already has available, such as Maps and YouTube, to provide an immersive experience for little to no money. Either pick up a kit for around $20, or gather your own materials and build it yourself. Google’s approach to the do it yourself aspect of home technology is a trend I’d like to see continue, especially given the technology giant’s propensity for providing a quality product in what is often an early market.

Newer PostThe Moto Hint May Be the Next Big Bluetooth Earpiece for You
Older PostSnapchat Hacked: What does this mean for your personal photos and security?