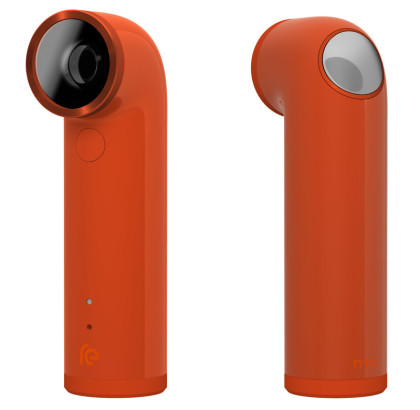 HTC has a daunting task ahead of them.

Recently the mobile company announced the RE Camera. Basically an attempted grab a piece of the GoPro market, HTC is hinging the popularity of this small, handheld camera on what they believe is the niche that the GoPro occupies. The RE is meant for everyone and for any situation. They want you to be able to use it in any situation and it’s meant to be less cumbersome than your smartphone, which it pairs with fairly easily through the HTC app that you download upon purchase of the RE.

After playing with it, I do have some concerns, but I can see the potential.

Much of the premise of the RE camera is based around its ease of use and I have to admit, it is incredibly easy to use. There is no power button. Sensors can tell when the camera is lifted and ready to use, and when it picks up on this movement, it automatically turns on. Two buttons are all you’re going to find on the housing. The rear button, which would be placed right under your thumb, is used for what you’d expect it to be used for. A single press takes a still image, a long press begins video and ends it with another click. An LED light indicates, in a classic manner, when recording with a blinking red light. The front button is for slow motion recording, which will show on the LED indicator as a blinking blue light. You’ll find around an hour and a half of use on a full charge, which is significantly less than most models of the GoPro, which usually clock in at around 2.5 hours. And while HTC boasts that the lack of a view finder is compensated by the incredibly large field of view that the RE has, I found it difficult to adjust back to a camera without some sort of visual indicator of what it’s pointing at. However, this easily remedied through syncing with the HTC app for either Android or iOS, though you are then left with two devices to manage. Its plastic shell is durable enough, though don’t expect it to be as tough as the GoPro, though HTC says that it can stay submerged in a meter of water for up to 30 minutes, though that’s something I did not test. All in all, it seems like a wonderful device with a lot of capability, but the biggest hurdle most will have with the RE is the $200 price tag. The average GoPro, that is more useful, comes in cheaper than that, and carries a massive suite of first and third party accessories to make it much more versatile than the RE is likely destined to be.

If the price were lower, it would be a great alternative. But with it that high, I don’t see the RE being the competitor HTC hopes it to be.

Newer PostThe MobileTweaks News Roundup for Early October!
Older PostBroken 5S Screen? No Warranty? We Have the Help You Need!