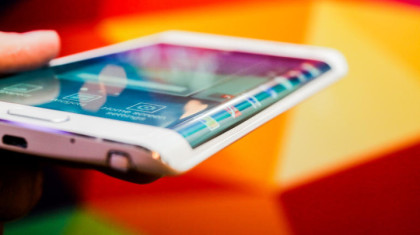 Rumors of a bent edge phone have been circulating for quite some time. Several of the larger developer companies have teased it for several years, stating that it is the future that all smartphones will inevitably head towards, but no one has earnestly shown a working prototype in it’s full form. A little over a year ago Samsung showed off the prototype Youm, a bent display phone that curved around the right side of the casing, but little else was heard about it till now. The Samsung Galaxy Edge is, at heart, just a Galaxy Note 4. However, the most obvious difference is the curved edge on the right side of the phone. It still touts a 5.6 inch screen, however, it has a 160 extra rows of pixels along a side display to allow a multitude of functions to be displayed apart from the main screen of the phone itself. Sleek and eye-catching, it’s hard to look away from the oddball phone. Though due to the right-side only display, left handed users may find it difficult to adjust to the Edge, though Samsung’s solution is to simply flip the phone upside down and let the screen reorient. However, the Home button on the top and adjust oddly to incoming or outgoing calls proves to be inconvenient, though a simple bluetooth headset fixes the latter problem. And with physical buttons starting to fade, the home button is something that most could overlook. Still armed with the impressive Note 4 internals, only coming up short from it’s bigger brother by having a slightly smaller battery, so if you have issues with the battery life on your phablet Note 4, then the Edge may not be for you. But with portable chargers ever more popular and cheaper, this is often an easy workaround. The thin display curving off the side of the phone is very basic in approach. With several standard swipe-through menus to choose from, even a picture strip you can customize yourself from your own images, much of what will be shown on the side strip will be dependent on whatever application you are running at that moment. With notifications, clocks, news feeds, and many others finding home on the strip, it frees up a lot of real estate on the main display that would normally be taken up by such things. This also allows apps and games that would normally be interrupted by incoming texts or calls to have their notifications show up on the side, allowing you to continue unimpeded. The side strip even has a game, and only one for the moment, that is a SIMON-style memory game, that’s available. Accompany these uses with things such as a night-clock and even a ruler and Samsung seems to be onto something impressive with this device, though at the moment it will be considering part of a very niche market. Still, with the speed that mobile technology develops, it will likely be no time before the bent-display phone is the norm. The Galaxy Edge is an interesting take on what is coming around the bend for smartphones, pun intended. Look for the Galaxy Edge in Fall of 2014.