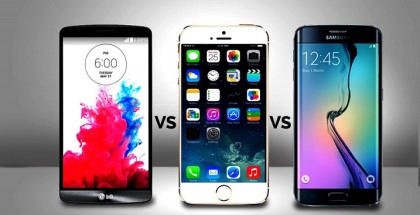 Aside from these three big giants battling it pot, smartphone fans all over the world is certainly having their own debates on which is the best, thus leading to much uncertainty for individuals who are planning to purchase a new smartphone. Each model from each giant does offer its own excitement and special features that can be a decision-making factor in selecting the perfect one.

Many are wondering if the LG G4, being the new kid on the block, will stun the competition, or the classic battle will still ensue between the iPhone 6 and Galaxy S6. The specification battle is certainly a big factor in winning the battle, but the styling and charisma strongly influence buyers. Here are some details that can help you decide which device would work best for you. Though the LG G4 still gets a familiar design, this time, you can choose from a leather or plastic back casing. LG basically improved everything on the G4, improved design, improved cameras, a better display, and better software. Compared to the G3’s screen, that was the best at the time, LG somehow was still able to improve it more. The G4 now features a QuadHD 5.5-inch IPS Quantum (2,560 x 1,440) display that provides 20% better color production and also 50% greater contrast. The screen of the new release also is also 25% brighter, but still 11% more efficient when it comes to power.

It is powered by Qualcomm’s Snapdragon processors, the company’s newest and fastest. The G4 is equipped with a top-of-the-line Snapdragon 810 octa-core processor with a special Snapdragon six-core 808 chip. Though it seems low, the G4’s 808 CPU is more than enough to satisfy your needs. In fact, the Android 5.1 “Lollipop” system runs smoother on the LG G4 than devices that use faster 810 chips. Web browsing in Chrome is very snappy, upload times of 3D games are quick and do not lag, and LG’s “Dual window” feature, running two apps at the same time works perfectly.

To sum it up, the G4 has an amazing QuadHD display, clear front and back cameras, very responsive Android UI, better leather texture and features a removable MicroSD card slot and battery. The G4 is packed with the best technologies added with sleek design. Apple decided to boost the iPhone 6’s screen size, which is a very important factor that makes a worthy and powerful contender. It features a 4.7-inch screen with a 326-pixel count that may not be that impressive, but because the fans that didn’t like the previous small screen used, they consider this a big game changer. Construction wise, compared to Samsung’s S6, the iPhone 6 has is the clear winner, but compared to LG’s G4, a debate is still ensuing.

The iPhone 6 is powered by an A8 dual-core processor paired with a 1GB of RAM. Compared to its competitors, the LG and Samsung devices may seem ahead, but it is important to consider that basically, it all basically comes down to a device’s overall usage and experience. This makes the 3 units fairly comparable when it comes to overall performance.

Apple still decided to stick to closing the door when it comes to external storage use. They simply offer different iPhone 6 in memory options, either a 16GB, 64GB or a 128GB device.  The iPhone 6 is equipped with an 8MP camera at the rear, quite decent when it comes to the megapixel count. It is important to know though that high megapixel resolution doesn’t always guarantee the best result. Since its initial releases, iPhones have been praised for the high-quality photos and videos its camera capture. Apple could have done better if the iPhone 6 is fitted with a much powerful battery, as it only uses a 1,180mAh power supply, the larger screen size can be an issue. The Galaxy series of Samsung has been gaining popularity these past years. It is fast making its way to being the most popular brand to date. Unfortunately, some are considering that the S6 as an iPhone 6 copy that is reconstructed with Samsung branding. This is certainly not a good reputation for any brand to hold on to.

Experts believe though that Samsung basically took ideas from Apple but not copied the whole design. To make sure they have the upper hand, Samsung fitted the S6 premium glass technology and strengthened S6 by using a metal frame. This was certainly a great move that projected the S6 as a worthy premium phone.

The S6 is equipped with a clear 5.1-inch display may be small, but its 577ppi blows the competition away. Samsung ditched the Qualcomm chipset and went with the Exynos octa-core chipset paired with 3GB of RAM. It basically performs similar to the LG G4’s chipset and offers more decent storage options than the iPhone6 with 32GB, 64, and 128GB options to choose from. When it comes to its camera, the S6 features a 16MP main camera that is considered by many to be better than iPhone 6’s camera. The S6’s battery life makes it an easy winner in this aspect as it is a 2,550mAH battery a certain advantage over the other devices.

There is no easy way to pick a clear winner, and this is because it largely depends on one’s preference and lifestyle. As of the moment, it is basically a choice between an iOS or Android smartphone. Again, this choice will depend on which system you feel more comfortable using. But if you are really in a dilemma choosing between the iPhone 6, G4, and Galaxy S6, and you want to consider highly on the overall specs and internals, on paper, the LG G4 as of now is ahead.