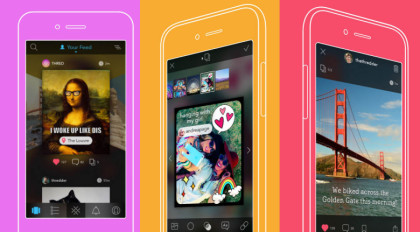 The creator of the SimCity and the Sims is back again, and this time with a new mobile app called the dubbed Thred which helps users to become more creative in a completely different way. This new app is very much similar to other photo- sharing apps in a sense that it allows you to revive your snaps with filters, borders, captions and stickers. The app also lets you share and create “multi-image stores” or so called threds. The threds are, in fact, virtual scrapbooks with photographs and links.

The founder and CEO of Thred, Will Wright said that this new app is a direct evolution of his interests in online communications and a tool which boosts imagination. He also mentioned that he was drawn to new shapes of entertainment, particularly those which lead users towards becoming more and more engaged with the world surrounding them.

When you’re ready to create a thred of your own, you can search within the app itself for images from the Internet, use photographs from your camera, or simply snap a new photo. You can also use location features to tell your friends about your whereabouts. In addition to all this, you can even spice up your images with fun text, stickers and filters. When done, you can tag people and add hashtags before sharing. You can also browse through other people’s threds, plus you can sort your feed to see most recent and popular posts. There is another interesting thing within this app; you can easily look for posts and topics you like the most and bookmark those threds. If you wish to see a thred as a whole, just click on it, and swipe the images from left to right.

The creators of this app said that it is useful for making many lovely things such as memes, travel diaries, how- tos and even Web comics.

Will Wright said that one of the main ideas behind this whole scenario is a better way to make and consume content for mobile devices. At this time, the app is only available for iOS devices.

Thred is based on Story web, a linking system, which combines all know ways of tagging something into one, such as location technology, hashtag and alike. The creator of Thred says he hopes the app becomes the destination that pulls in your friends’, and your posts from a pool of app sources. The thred is somewhat of a thin line between Instagram’s solo image and Snapchat’s perishable story. It will take weeks before the Thred proves to be more than just a novelty.

According to Will Wright, he is ready for any challenge put in front of him. His background was also a huge plus when it comes to scoring some investors such as Betaworks, Mayfield Fund, Andreesen Horowitz and a few others. It suffices to say that Wright isn’t going to be alone by a long shot.