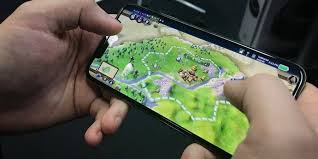 Strategy games are insanely popular and have continued to grow beyond belief over the last few years. However, with increasing popularity means the market has become saturated with content and apps for you to enjoy. While some are pretty good and will have you hooked from the beginning, some are terrible and should be avoided at all costs.

With so many options out there, we’ve taken the time to explore and list out the very best of the best mobile strategy games currently out there, ensuring you have all the information you need to enjoy the very best the industry has to offer and maximize your entertainment!

Sid Meier’s is one of the generation’s leading strategy game developers, and the mobile game world was blown away when they released the second edition of their Revolution series. Of course, these games aren’t as polished or feature-rich as the PC desktop version, but there are still plenty here to sink your teeth.

Summoner Wars is a mobile video game that has taken the world by storm and is enjoyed by hundreds of thousands of players around the world. The most significant pull is the immersive gameplay and huge selection of monsters you can play as and control; all in the form of a power card game.

Available for 2-4 players, Summoner Wars is a non-stop action ride that will have you hooked for hours and hours to come. There are lots for seasoned players to learn about here, so it’s recommended you use a summoners war monster guide to help you get started!

The Battle for Polytopia is one of those games that many describe as a hidden gem. Sure, it hasn’t been marketed hard or pushed down our throats, but it’s a blissful experience suitable for anyone looking for some easy going strategy. The graphics are amazing for a mobile device, and you can play easily or with a ton of strategy points; it’s entirely up to your own style of play!

A slightly different game than your typical strategy game, The Escapists 2 is based on the hit computer phenomenon game that captivated players around the world. All you need to do is plan your attack on how you’re going to escape prisons with various different security levels.

There are five prisons in total to escape, awesomely hilarious scripting and writing, dozens of items to aid your escape, this is the endless action-packed sequence you’ll adore. You can even play with friends over local internet and networks and tons of cool features added all the time.

Plague Inc is one of our favorites when it comes to mobile strategy, simply because it’s so unique. Indirectly take control of a virus to wipe out every single person on the planet. Change how your virus is transmitted and upgrade symptoms to make yourself more deadly. Just make sure you don’t get caught!

There are so many mobile strategy games out there it can be hard to know where to begin; but with this list, you should be able to find a game that is best suited to your style of play! Now you just need to sit back, relax, and get involved in some of the best gaming around!