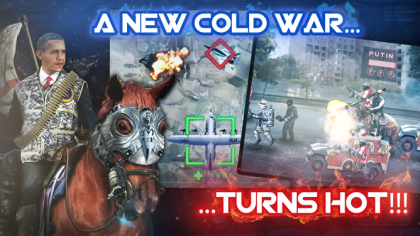 Video games have been a significant part of many people’s lives, considering the exciting and thrilling genres, characters, and settings. Video games are past time, hobbies, and others consider as their passion, collecting wide ranges of games. Today, some of the video games try to sketch people and events. Famous personalities and politicians have become popular targets, making these games, wacky yet very entertaining such as the Wrath of Obama.

What to Watch Out For? In the video game Wrath of Obama, you will see rocket launchers, destruction, bears, and a whole lot of action. In fact, it’s just the tip of the iceberg as Lenin resurrects from the grave. Here, you won’t see Putin and Obama go head to head, but they will team up in order to take down Lenin, along with his zombie comrades. The gameplay is somewhat a cross breed between top-down shooters and battles, you’ll see a lot of aerial combats. The trailer itself shows Putin rides on a bear, geared up with a rocket launcher, while Obama on a horse with his .44 magnum. So, this alone can convince many video game aficionados to try this peculiar, but nerve-racking game! Through the years, Putin and Obama made noises across the globe, attracting criticisms for the actions they take in their respective regimes. Putin is known for secretly invading another country and then killing a whole lot of people. Obama, on the other hand, is renowned for his unwavering support of the constitutional and the full surveillance of United States citizens and the country’s allies. However, in this video game, both of them favor one thing – that is to take down Lenin as he tries to raise an army of monstrous, undead Soviet soldiers. In the Wrath of Obama, Lenin resurrects from hell, and with him are thousands of undead Soviet Union soldiers. Their main goal is to take over and dominate the world. Fortunately, Obama in partnership with Putin, will try to halt this unearthly goal. Both Obama and Putin will take their armors and gears, along with their horse and bear as rides to combat Lenin and the zombies, acting as heroes to basically stop the Red Dead army. Although this video game is satirical in nature, it really has a story. It is mostly made up of laughably political impressions and Photoshop stills that are authentically shocking and interesting. The Wrath of Obama is in fact very reasonable without in-app purchases. So, get ready for this innovative action combination, a cold-war-turned-hot, created by Ankaar Productions, a dark-humor game company.