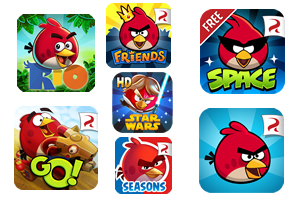 If you have an Android phone you must know about the Angry Birds Game but wouldn’t be aware with its huge collection of different versions. Here I collected some of the great features of Angry Birds. Pick your favorite version and get enjoy the Angry Bird Games New 2015 Updates. Angry Bird is the most popular games on Google Play Store that gives a great entertainment to its players. There are several levels are the part of this game and each level requires logical skills to complete the task. In case you stuck on any level you can buy the premium features to solve the level, and this purchase will give you ultimate features of the game to enjoy it more. Star Wars was one of the most famous Hollywood series, the Angry Birds Star Was HD version also goes viral with thousands of downloads. Once you install the game you will be able to join the epic adventure with the angry birds star wars version. This game featured with several unseen adventurous moves that will give you full entertainment. This game is going to be thrilling for all of the angry bird lovers, having a great adventure of downhill on Piggy Island. You will be able to enjoy the plenty of twists and turns in an exciting race to the finish line. During playing you have to be aware with the several hurdles on the roads. Use the awesome special powers to smash your opponents and many other games modes as per your capability. This is the most popular and thrilling game among the Angry Bird series. There are more than 300 levels are the part of this game that you can play across 10 planets. The Space Features make this game difficult to play and give you more entertainment and thinking ability to solve the puzzles. Angry Birds Friends give you opportunity to enjoy the game with your friends. It allows you to participate in the weekly tournaments with friends and play new levels each week. You can join millions of players around the world to compete in big angry birds leagues. Angry Birds Rio is the game that gives you the memories of famous RIO movie along with several funniest features. This game brings you to the magical city of Rio de Janeiro and huge amount of easy, medium and difficult levels keep you engaged with the game more interestingly. But if you get stuck on a difficult level the Mighty Eagle will dive from the skies to smash those meddlesome monkeys into stupor. Use extra power options that help you to complete the different levels of the game.