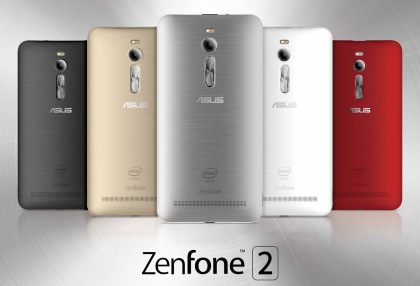 We all wanted to see what ASUS had in store for us next time, and if you ask me, they’ve surprised us once again with their ASUS Zenfone 2. The Taiwanese company had originally begun as a computer peripheral manufacturer, and perhaps being already an expert in micro circuitry has helped them to retain their foot on the smartphone market ground.

The Zenfone 2 kind of reminds everyone of HTC M9 and LG flagship phones (in the sense that the volume rockers are placed similarly and overall design seems to be similar as well). The power button though is at the top, and truth be told then we like this look. This phone comes with a rock weight of spcecs. It has a 5.5 inch screen which might seem to be too big for some people, but being an IPS screen, you’ll come across no viewing angle distortion whatsoever. It comes with a 13MP camera with dual LED flash and a 5MP front camera as well. It has 32GB of storage internally and could be expanded to up to 64GB via microSD card. The phone comes with Android Lollipop with a ZenUI overlay above it (like earlier versions of Zenfone). It also comes with a 3000mAh battery as well.

Ok, so let’s start with the review now. The first thing you’ll notice with this phone is that it has a butter smooth interface and you’ll face almost no lag for its lifetime, no matter what you pile on it. So +1 for the effortless multitasking abilities.

Battery life was something we had an issue with. Even with 3000mAh of battery, we still found it to run empty within 6 hours of moderate usage, so expect it to run out within 4 hours of heavy usage. Better buy a power bank for this mobile.

Now, we did hear about heating issues of Zenfone and yes, we found it to heat up as well, especially when you demand more from the smartphone at a time or you’re doing something online since a long time, but interestingly, the interface did not lag anytime during this heat-up. Let’s call that a wash. The Zenfone 2 also has an option to customize the User interface in any manner which you desire!

The camera is good but we think Lumia 640 XL has a better cam than Zenfone 2. Low-light images are taken very well. The huge internal memory implies that you could keep on taking snaps and you’ll still have space for plenty more. Selfies taken with this cam are also nice. Out of the 32Gb internal memory, you’ll find that only 20GB is usable.

when it comes to build quality, we found it to be appreciable, but not the best. That being said, it is one of the best in its price range. The finishings of this mobile are smooth and gives you a semi-metal feeling as well. Display is also pretty good as well and there’s little or no pixelation (hardly noticeable to even trained eyes).

At just below 20 grand, ASUS Zenfone 2 is surely a strong contender in this price range.