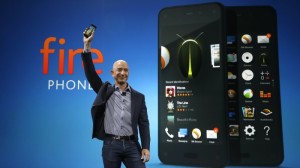 Amazon has been a leading online retailer for quite a long time. Providing goods of just about any type that it’s customers can think of, the giant is one of the top contenders in the online business market and has constantly been expanding it’s product base. It is a notable competitor with auction sites like eBay, has been involved in self-publishing of books and other writings, and has even stepped up to the plate with streaming services like Netflix. It’s latest venture, the Amazon Fire Phone, created quite the buzz during it’s development stages. However, now that it’s been revealed to the public, a lot of consumers and tech gurus are left wondering just what Amazon was thinking. To set the tone of the phone, the Amazon Fire Phone almost completely focuses it’s functions around the Amazon experience, making it the ultimate device to shop with and a one stop for all things Amazon. However this is an issue in that nearly every other smartphone on the market has most of the same capabilities as the Fire Phone and doesn’t lock you into Amazon’s retail universe. The Fire has no capability to access the Google Play app store and keeps it’s users from accessing the very popular suite of Google apps, such as Gmail, Maps, and Drive. These apps, to many smartphone users across the world, are almost essential in the synergetic way that they function both together and with the user’s daily life. The Google suite are not the only apps missing, from the Amazon App Store and the lack of these key functions keeps the Fire Phone from being as practical as an iPhone  or Android Smartphone. (Click here for a rundown of the latest Android update, KitKat) as well as being more expensive than most of the other smartphones on the market. While the artificial 3D screens, called Dynamic Perspective, makes for a interesting take on the home screen, it is overall a standing gimmick that the Fire Phone presents and offers little functionality purpose. Supported by a Qualcomm Snapdragon 800 quad-core processor, the phone seems bogged down despite it’s powerful internals that several other phones on the market carry as well and function at a much higher level. A relatively short battery life, coming in at 10 hours of talk time, is far shorter than many of the rival phones it’s being marketed against. Firefly, the Fire Phone’s ability to identify objects and text with it’s rear facing camera, is an interesting application though tends to be sluggish and finicky.

The lack of critical app selection within the Amazon App Market, the limited capabilities of the hardware, and the forcing of the Amazon experience on the phone’s users, something that many popular apps on other platforms can do themselves, makes the Fire Phone a weak offering from the retailer. In short, the Fire Phone is great if your entire mobile experience centers around shopping on Amazon but falls short for everything else.

The Amazon Fire Phone is available now on the AT&T network.